"Adoption of our SAPIEN 3 transcatheter valve system continued to propel our growth, which exceeded our projections. Furthermore, the growing body of compelling clinical outcomes gives us confidence that with expanded evidence, larger populations of patients suffering from aortic stenosis will be eligible for TAVR."

Net sales for the quarter ended September 30, 2015 were $615.5 million.  U.S. and international segment sales for the third quarter were $323.1 million and $292.4 million, respectively. The strong U.S. dollar continued to have a significant negative impact on reported sales. On an underlying basis, sales grew 13.6 percent.  Net income for the quarter ended September 30, 2015 was $118.1 million, or $1.07 per diluted share.

For the third quarter, the company reported Transcatheter Heart Valve Therapy (THV) sales of $296.1 million, a 10.8 percent growth rate over the third quarter last year, or 29.4 percent on an underlying basis.  Strong global sales were led by the company's market-leading products in both the U.S. and Europe.

"Our THV performance was driven by strong procedure growth and the on-going SAPIEN 3 launch, which is on track, and clinicians are rapidly adopting our best-in-class technology," said Mussallem. "Based on our year-to-date results and the strong demand for SAPIEN 3, we now expect our underlying THV sales in 2015 to be at the high end of our previously estimated 25 to 35 percent growth rate."

Critical Care product group sales were $131.5 million for the quarter, representing a decrease of 3.8 percent versus last year, or an increase of 5.0 percent on an underlying basis.

For the quarter, the company's gross profit margin was 76.2 percent, compared to 72.3 percent in the same period last year. The year over year increase resulted primarily from favorable foreign exchange and favorable product mix. Assuming foreign exchange rates remain at current levels, the company expects its gross profit rate in the fourth quarter to be approximately 75 percent.

Selling, general and administrative expenses decreased to $212.0 million for the quarter, or 34.4 percent of sales. This decrease was driven primarily by the favorable foreign exchange impact on expenses outside the U.S.

Research and development investments for the quarter increased to $101.0 million compared to $87.6 million in the prior year period.  This increase was primarily a result of continued investments in the company's valve programs, including the recent acquisition of CardiAQ.

Cash flow from operating activities for the quarter was $202.5 million. After capital spending of $26.0 million, free cash flow was $176.5 million.

For the nine months ended September 30, 2015, the company recorded net income of $354.2 million, or $3.22 per diluted share, compared to $701.9 million, or $6.49 per diluted share, for the same period in 2014. The year-ago period included a $750 million payment to Edwards from a litigation settlement. Diluted earnings per share decreased 50.4 percent over last year, or increased 36.6 percent, excluding special items.

During the nine months of 2015, the company repurchased approximately 1.3 million shares of common stock for $180.1 million.

"Our strong year-to-date financial performance demonstrates the strength of our market-leading product portfolio," said Mussallem. "We believe our strategy of focused innovation can transform patient care and drive value to the healthcare system and to shareholders.  In light of the impressive body of clinical evidence, we are enthusiastic about the continued expansion of transcatheter-based therapies for the many structural heart patients still in need, which positions us for a bright future."

Edwards Lifesciences is the global leader in the science of heart valves and hemodynamic monitoring.  Driven by a passion to help patients, the company partners with clinicians to develop innovative technologies in the areas of structural heart disease and critical care monitoring, enabling them to save and enhance lives. Additional company information can be found at www.edwards.com.

Edwards Lifesciences will be hosting a conference call today at 2:00 p.m. PT to discuss its third quarter results.  To participate in the conference call, dial (877) 407-8037 or (201) 689-8037.  For 72 hours following the call, an audio replay can be accessed by dialing (877) 660-6853 or (201) 612-7415 and using conference number 13620647.  The call will also be available via live or archived webcast on the "Investor Relations" section of the Edwards web site at ir.edwards.com or www.edwards.com. A live stream and archived replay can also be accessed via mobile devices by downloading Edwards' IR App for iPhone and iPad or Android.

[1] "Underlying" amounts are non-GAAP items and in this press release exclude foreign exchange fluctuations and the THV sales return reserve. See the Non-GAAP Financial Information page and reconciliation tables below.

To supplement the consolidated financial results prepared in accordance with Generally Accepted Accounting Principles ("GAAP"), the Company uses non-GAAP historical financial measures.  The Company uses the term "underlying" when referring to non-GAAP sales information, which excludes foreign exchange fluctuations, adjustments for discontinued and acquired products, and sales return reserves associated with transcatheter heart valve therapy ("THV") product upgrades, and "excluding special items" to also exclude gains and losses from special items such as significant investments, impairments, litigation, and business development transactions.  Guidance for sales and sales growth rates is provided on an "underlying basis," and projections for diluted earnings per share, net income and growth, gross profit margin, taxes, and free cash flow are also provided on the same non-GAAP (or "excluding special items") basis due to the inherent difficulty in forecasting such items.  The Company is not able to provide a reconciliation of these non-GAAP items to expected reported results due to the unknown effect, timing, and potential significance of special charges or gains, and management's inability to forecast charges associated with future transactions and initiatives. Management does not consider the excluded items or adjustments as part of day-to-day business or reflective of the core operational activities of the Company as they result from transactions outside the ordinary course of business.

The items described below are adjustments to the GAAP financial results in the reconciliations that follow:

THV Sales Return Reserve and Related Costs - In the first and second quarters of 2014, and in the second quarter of 2015, the Company recorded a net sales return reserve and related costs, primarily related to inventory reserves, of $15.6 million, $6.1 million, and $15.9 million, respectively, related to estimated THV product returns expected upon introduction of next-generation THV products.  The Company recorded a net $2.4 million and $16.0 million reversal of these reserves in the third quarter of 2015 and 2014, respectively, upon delivery of the next-generation THV products.

Asset Write-down - The Company recorded a $5.0 million charge in the third quarter of 2014 to write-down assets related to its automated glucose monitoring program.  The charge related primarily to intellectual property, fixed assets, inventory and severance expenses.

Charitable Foundation Contribution - The Company recorded a $50.0 million charge in the second quarter of 2014 for a charitable contribution to the Edwards Lifesciences Foundation.

Settlement - The Company recorded a $7.5 million charge in the first quarter of 2014 to settle past and future obligations related to one of its intellectual property agreements.

Provision for Income Taxes -  During the second quarter of 2014, the Company recorded a $6.2 million tax benefit due to the remeasurement of its uncertain tax positions. 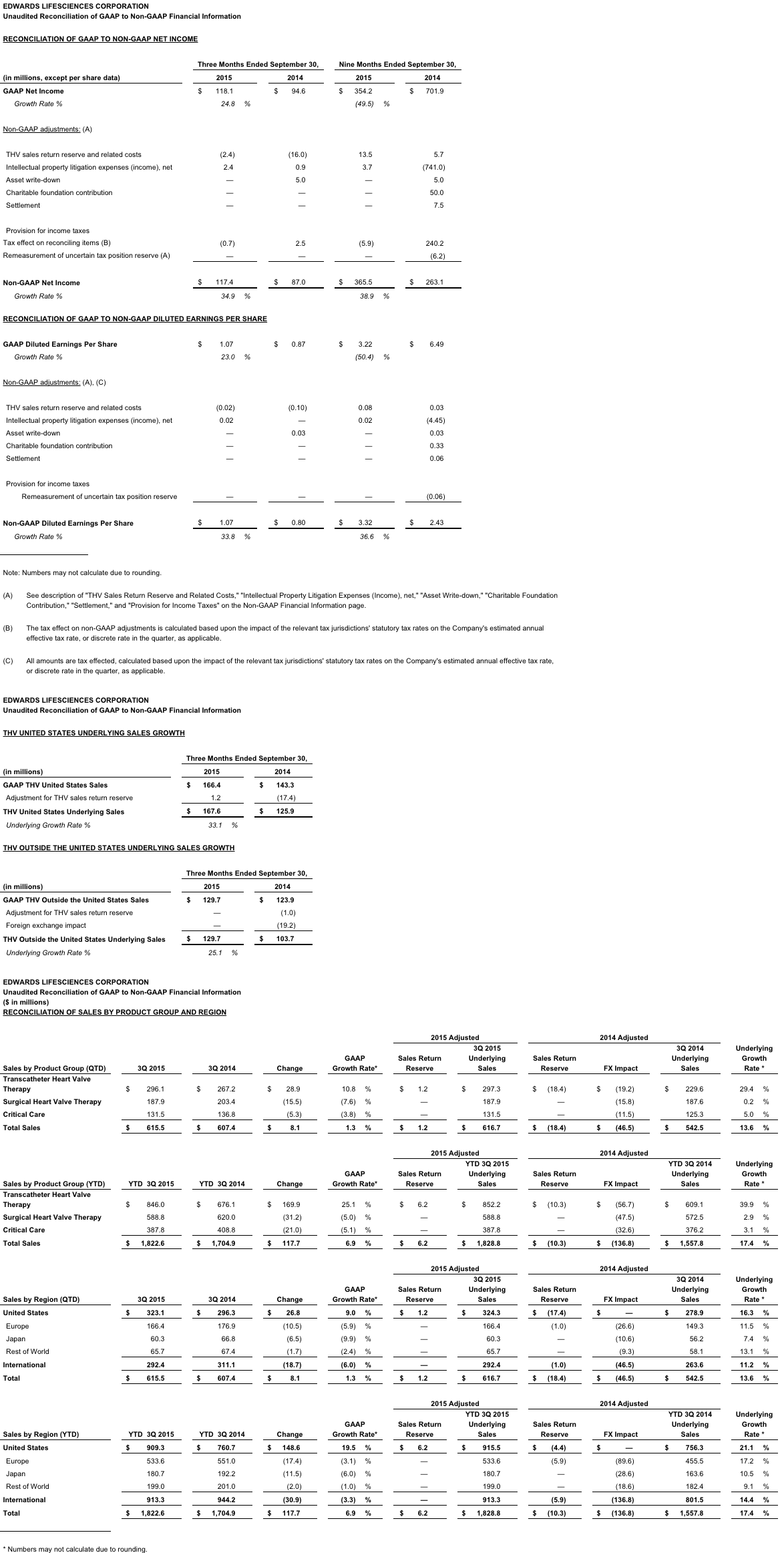 Please update to a current version of your preferred browser, this site will perform effectively on the following:

Unable to update your browser?

If you are on a computer, that is maintained by an admin and you cannot install a new browser, ask your admin about it. If you can't change your browser because of compatibility issues, think about installing a second browser for browsing and keep this old one for compatibility